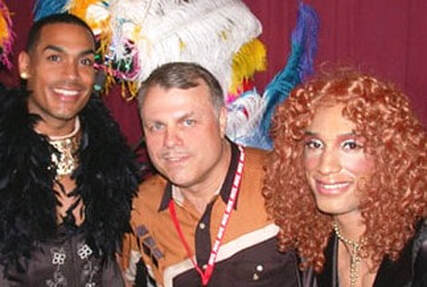 Luna Luis Ortiz (Overall Father of the House of Khan) was born in New York City in 1972. In 1986, he was infected with HIV at the age of 14 from his first sexual experience. In 1988, he began his journey as an HIV awareness spokesperson for youth living with HIV under the leadership of Ann Northrop and Andy Humm at the Hetrick-Martin Institute. Over the years, Luna has dedicated his life to HIV prevention for youth in New York. New York City Mayors Edward Koch and David Dinkins noticed his early work as a youth activist, which helped Luna Luis Ortiz to receive letters of appreciation from both Mayors. He has since studied photography at the School of Visual Arts and is the protégé of famed photographers David LaChapelle and Nan Goldin. He became a member of the Archive Project at Visual AIDS in 1995, where the work of artist living with AIDS is preserved and celebrated. His photography has been included in photography exhibitions at New York galleries, as well as the Boston Center of the Arts and the New Museum of Contemporary Art in New York. He was a featured artist living with HIV on MTV and VH1, TeleMundo, ABC, NYI, MSNBC, LOGO and PBS documentaries. His work graced such publications as The New York Times, The Advocate, POZ, The New York Daily News, OUT, VIBE, Gay Times (London), Teen People and A&U. He recently experienced a collaboratively supported publication, produced by AIDS organizations titled 'If We Have to Take Tomorrow,' which helped address issues about HIV/AIDS in the Black and Latino communities. In 2001, he joined the permanent collection at the Kresge Art Museum at Michigan State University under the leadership of Shedrich Williames. He taught photography and art therapy at The Hetrick-Martin Institute, Home of the Harvey Milk High School from 2000 to 2007. He is one of the co-founders of the House of Frame by Frame Fierce, a project that teaches animation filmmaking to high risk youth as a form of activism. In 2007, the House of Frame by Frame Fierce received a Peabody Award for their work on a documentary short titled ‘I'm Not a Boy’ about the life of a transgender youth. He is featured in a documentary film, How Do I Look about the house/ball community in New York City.  From 2006- 2009, Luna was one of the spokesmodels for the 'HIV Stops with Us' campaign, which were very prominent throughout the United States. In 2006, he received an Emery Award for his contributions to his respected communities as well as the Distinguished Service Award from the State of New York.  Today, he continues his dedication to HIV prevention and youth work at Gay Men Health Crisis (GMHC). At GMHC, he works tirelessly on GMHC Social Marketing Campaigns, as well as host youth workshops, conferences, and health fairs to over 250 youths of color. He engages youth through his video Vlog shows ‘The Lunch Box Show’ www.youtube.com/ TheLunchBoxNYC and ‘The Luna Show’ on www.youtube.com/ TheLunaShowNY that celebrates and preserves the ballroom history of the Latino and Black LGBT experience, as well as HIV Awareness.
Home   About   Downloads   DVD    Videos