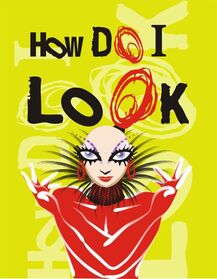 the Icons and Legends from the "Ballroom" community have influenced
the biggest stars in pop culture and are setting trends
in fashion, dance, music, runway.
They are the originators of the “Vogueing / Vogue” dance.

The Creative Lifestyles, Fierceness and Fabulousness,
is the Ultimate Runway Battle Zone
for recognition, status and fame and to get voted into the Ballroom Hall Of Fame.

Wolfgang Busch's first release How Do I Look
won Two Humanitarian & Best Documentary award.
Wolfgang received many awards, honors and rewards from the LGBT Community.
Wolfgang was induction into the Hall Of Fame three times.
One for the contributions to the LGBT music community in New York City.
Wolfgang's company Art From The Heart Films was inducted into the
"Business Hall of Fame, Gay and Lesbian Organization,
Best of 2018 and 2020, Queens, New York.
Wolfgang lectures "Artistic Empowerment and HIV/AIDS awareness"
at the most prestigious Universities, Colleges,
High Schools, Cultural and Educational institutions, Churches,
and his films are used by more than 20 students for theses,
research and education worldwide.

Wolfgang is sponsoring categories at Balls on a regular bases
and is still serving the community, including judging at Balls
and is the treasurer for the Kevin Omni's Burial Fund.

While the film Paris is Burning by director Jeannie Livingston
was rejected by the Ballroom historians and many Icons,
because of its exploitation, in-balance and lawsuits,
the community came together to produce How Do I Look.

Wolfgang reveals why the “Ballroom Hall of Famers”
are influencing the biggest stars in pop culture.
He brings the spotlight to the “Icons and Legends”
and takes you inside the Harlem Drag Ball competition,
where they showcase their talents on and off the runway.
We learn about their daily struggles with HIV/AIDS,
mental health issues, drug abuse and artistic exploitation
by the AIDS agencies in New York City.

How Do I Look is featuring the vogueing sensations Willi Ninja,
Jose Xtravaganza and Andre Mizrahi, and the
life-style of Octavia St. Laurent and Carmen Xtravaganza.

Supermodel Tracy Africa is reveling why she had to leave New York City
to continue her modeling career in Paris, France.

Bazaar fashion designer Ross Infiniti is passing on the ballroom culture & traditions
to the next generation.

Watch them how they bring it to the runway, were they battle for status and fame
and to make it into the “Ballroom Hall of Fame”,
the ultimate “Ballroom” achievement.
_(c) Art From The Heart Films, all rights reserved