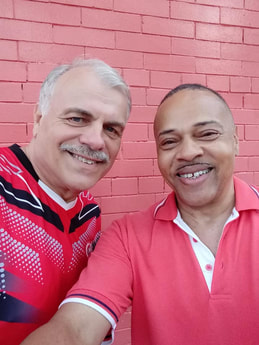 Assistant Director Kevin Ultra Omni is a Hall of Famer, Legendary Legend, Icon with 160 trophies, and Peer Educator. He has been in the "Ball" community since 1980. The "House of Omni" has chapters across the country and is one of the oldest "House" in the United States. Also, he received the Lifetime achievement award as well as the hall of fame award. Kevin is also a Board member of Black Pride NYC. Kevin Omni is a host at parties for promoters such as James Saunders and Charles Jackson. He is featured in the upcoming book, The Award Winning Men, written by Ed Karvoski, Jr., and he has been featured in such media as : MTV News, New York Daily News, The Village Voice, The New York Times, Venus Magazine, and Vrij Nederland Magazine (Amsterdam, Europe). A longtime activist, charity event coordinator, and outspoken promoter, Kevin Ultra Omni has set precedent for events informing and educating a large percentage of the gay community, bringing reality and truth to the crisis of the HIV and AIDS epidemic. We are reaching out to you for financial & in-kind support. In return you receive credit in the film, free merchandise, invitations to screenings and CD soundtrack. Politicians, Churches, Community Agents and Business Merchants are very important to us, because they need to hear the "Ball children's" voices and concerns. The "Ball" community is the hardest hit HIV/AIDS community. The gap left behind reminds the survivors, how much we miss our lovers and friends, MIND, SPIRIT & SOULS. But not only that, the wounds take years to heal, and the individuals can never be replaced. Here is a glamorous opportunity to make a difference and help us to improve our quality of life. To produce an international successful film/documentary for the mainstream film audience and international film festivals, we need to raise production/post production funds to finish the empowerment project How Do I Look. All the favorite categories and individuals are featured artistically and magically, showcasing the New and Old School Legends in their best light possible. ​