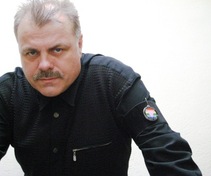 Wolfgang Busch is an openly gay artistic and social activist, and a self-taught Documentarian/Filmmaker. He started his career in 1995, at the age of 40. He founded Art From The Heart LLC, because he saw a need to build an artistic infrastructure for the under-served communities.

Wolfgang’s first Historic LGBT Art Documentary “How Do I Look” was released in 2006, where he takes you inside the Harlem Drag Ball Community. He brings the spotlight to the trend setting Icons and Legends in fashion, dance, runway and music and why they inspire the biggest stars in pop culture, such as Madonna, Lady Gaga and fashion designer Marc Jacobs.

“Flow Affair” was released in 2011. Wolfgang is introducing to the public for the first time the Flagging Dance, and the evolution of Flow Arts, including the flagging, fanning, poi, voguing and the new floguing dance. Featured in Flow Affair are flagging sensation Xavier Caylor from San Francisco, and fanning / floguing sensation Aaron Enigma from Chicago.

Wolfgang documented those dance forms that originated in the gay community and is recording the oral and performance history and legacy. In 2006, Wolfgang brought together the voguing and the flagging community for the first time, and together they created the new floguing dance. Flagging + Voguing = Floguing.

Wolfgang won for “How Do I Look” a Humanitarian Award in 2008, Best Documentary in 2007, and many rewards and much recognition within the LGBT and Straight communities worldwide, including the induction into the LGBT Hall Of Fame.

Wolfgang inspires and motivates people from all walks of life and lectures at the most prestigious Universities and Community Based Organizations about LGBT artistic empowerment and HIV/AIDS awareness. His films are used by students for research and thesis and are making it into the history books.

Producer Kevin Ultra Omni is a Hall of Famer, Legendary Legend, Icon with 160 trophies, Peer Educator and has been in the "Ball" community since 1980. The "House of Omni" has chapters across the country and is one of the oldest "House" in the United States. Also, he received the Lifetime achievement award as well as the hall of fame award. Kevin is also a Board member of Black Pride NYC. Kevin Omni is a host at parties for promoters such as James Saunders and Charles Jackson He is featured in the upcoming book "The Award Winning Men" written by Ed Karvoski, Jr. and has been featured in such media as: MTV News, New York Daily News, The Village Voice, The NY Times, Venus Magazine, and Vrij Nederland Magazine (Amsterdam, Europe). Longtime activist, charity event coordinator, and outspoken promoter, Kevin Ultra Omni has set precedent for events informing and educating a large percentage of the gay community. Bringing reality and truth to the crisis of the HIV and AIDS epidemic.. We are reaching out to you for financial & in-kind support. In return you receive credit in the film, free merchandise, invitations to screenings and cd soundtrack. Politicians, Churches, Community Agents and Business Merchants are very important to us, because they need to hear the "Ball children's" voices and concerns. The "Ball" community is the hardest hit HIV/AIDS community. The gap left behind reminds the survivors, how much we miss our lovers & friends, MIND, SPIRIT & SOULS. But not only that, the wounds take years to heal and the individuals can never be replaced. Here is a glamorous opportunity to make a difference and help us to improve our quality of life. To produce an international successful film/documentary for the mainstream film audience and international film festivals, we need to raise production/post production funds to finish the empowerment project "How Do I Look". All the favorite categories and individuals are featured artistically and magically, showcasing the New and Old School Legends in their best light possible.

Luna Luis Ortiz (Overall Father of the House of Khan) was born in New York City in 1972. In 1986 he was infected with HIV at the age of 14 from his first sexual experience. In 1988 he began his journey as an HIV awareness spokes person for youth living with HIV under the leadership of Ann Northrop and Andy Humm at the Hetrick- Martin Institute. Over the years Luna has dedicated his life to HIV prevention for youth in New York. New York City Mayor’s Edward Koch and David Dinkins notice his early work as a youth activist, which helped Luna Luis Ortiz to receive letters of appreciation from both Mayors.   He has then studied photography at the School of Visual Arts and is the protégé of famed photographers David LaChapelle and Nan Goldin. He became a member of the Archive Project at Visual AIDS in 1995; where the work of artist living with AIDS is preserved and celebrated. His photography has been included in photography exhibitions at New York galleries as well as the Boston Center of the Arts and the New Museum of Contemporary Art in NY. He was a featured artist living with HIV on MTV and VH1, TeleMundo, ABC, NYI, MSNBC, LOGO and PBS documentaries. His work graced such publications as The New York Times, The Advocate, POZ, The NY Daily News, OUT, VIBE, Gay Times (London), Teen People and A&U.   He recently experienced a collaboratively supported publication, produced by AIDS organizations titled 'If We Have to Take Tomorrow'that helped address issues about HIV/ AIDS in the black and Latino communities. In 2001 he joined the permanent collection at the Kresge Art Museum at Michigan State University under the leadership of Shedrich Williames. He taught photography and art therapy at The Hetrick-Martin Institute, Home of the Harvey Milk High School from 2000 to 2007. He is one of the co-founders of the House of Frame by Frame Fierce; a project that teaches animation filmmaking to high risk youth as a form of activism. In 2007 the House of Frame by Frame Fierce received a Peabody Award for their work on a documentary short titled ‘I'm Not a Boy’ about the life of a transgender youth. He is featured in a documentary film, 'How Do I Look' about the house/ ball community in NYC.  From 2006- 2009, Luna has been one of the spokes-models for the 'HIV Stops with Us'campaign, which are very prominent throughout the United States. In 2006 he received an Emery Award for his contributions to his respected communities as well as the Distinguished Service Award from the State of New York.   Today he continues his dedication to HIV prevention and youth work at Gay Men Health Crisis (GMHC). At GMHC he works tirelessly on GMHC Social Marketing Campaigns as well as host youth workshops, conferences and health fairs to over 250 youth of color. He engages youth through his video Vlog shows ‘The Lunch Box Show’ www.youtube.com/TheLunchBoxNYC and ‘The Luna Show’ on www.youtube.com/TheLunaShowNY that celebrates and preserves the ballroom history of the Latino and Black LGBT experience as well as HIV Awareness.
_

_(c) Art From The Heart Films, all rights reserved